Professional rodeo rules of competition have been formulated over the years by the cowboys themselves, but are designed to the animals’ advantage. The Professional Rodeo Cowboys Association sets the standard for rodeo competition, and excerpts from the PRCA rule book are used in these basics of how to watch pro rodeo. 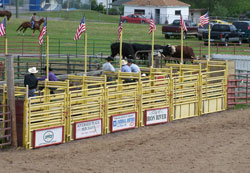 Watch closely because sudden disqualification or severe penalty can occur at the outset of most any roughstock ride or timed-event run. In timed events (calf roping, steer wrestling, team roping), cattle are given a head start from the chute. They de-activate a headstart “barrier” themselves as a rope around their necks pulls a pin and then breaks away. If a contestant’s horse hits the rope barrier before this pin is pulled, a pressure point in the barrier breaks, and a signal from the barrier judge indicates a damaging 10-second penalty. 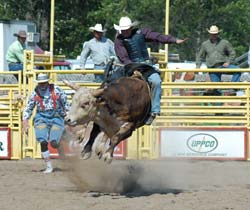 Watch for body control and balance. Spurring is not required. Bull riders tend to be smaller, wiry men who look smaller still against the 1,500-2,000 pound animals. They ride with just a flat-braided”loose” rope pulled tight (Not tied-around the animal and held fast by the riding hand.) Although the cowboy isn’t required to spur, you will see many of them moving their feet, scrambling to keep contact with the bull, whose power is too great to permit just one lasting hold. 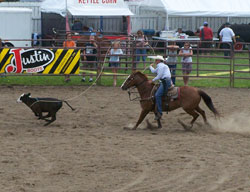 After the catch, watch the cowboy’s speed on the ground. Success depends upon the roper and horse working together, and some would say the highly trained horse is the more important member of the team. The horse must quickly catch up to the calf, position the cowboy to rope it, then maintain tension on the rope as the cowboy dismounts, throws the calf and ties any three of its legs (usually two hind and one front). The tie must remain secure for six seconds after the roper remounts and permits the horse to slacken the rope. 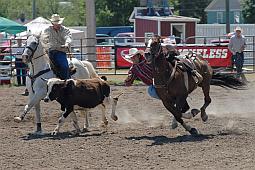 For the takedown, one horn is pushed low, the other lifted, nose tilted high. At about the time their horses reach the tail of the hard-running steer, the hazer ( a mounted helper) keeps the steer moving straight while the steer wrestler, from the opposite side, begins transferring his weight from his horse to the steer. His horse runs on past, carrying the cowboy up to the horns and taking his feet out in front of the steer, in position for the cowboy to slow the steer, turn him, and take him to the ground. 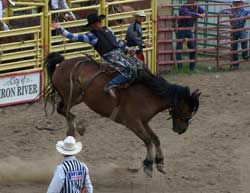 Watch the front-end spurring motion. Seemingly frantic, its deceptive. A good bareback rider is generally in better control of the ride than his wide-open style might indicate. But in this flamboyant event, it’s wild that wins. The trick is to time the spurring motion with the horse’s bucking action. When the horse leaves the ground, the cowboy jerks his knees and his spurs come up to the shoulders. His feet fly up, out and away from the horse. For the cowboy to stay in control, his feet must be back to the shoulders and against the neck when the horse’s front feet come back to the ground. 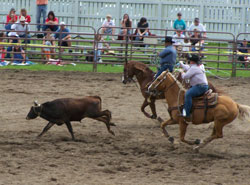 Watch the heeler’s loop. Properly executed, a true art form. While the experts make team roping look easy, with five entities involved, nothing is simple. The first roper, the header, rides after the steer and ropes the horns or head, takes a daily (wraps the rope) around his saddle horn and turns his horse away, leading the steer. A second roper, the heeler, rides in, ropes the hind legs and takes his daily. In an instant, the horses face the steer, the ropes come snug, and a judge signals time. If but one hind leg is caught, a 5-second penalty is added.

Watch the rider “spec” the next barrel even while rounding the one at hand. Fast, exciting and intensely competitive, women’s barrel racing provides colorful contrast to the rugged action characterized by most rodeo contests. Yet as much, if not more, as in other events, horse and rider cooperation is vital to success. The three barrels are “run” in a cloverleaf pattern requiring quick turns at high speed to win. Times are so fast and close they’re measured in hundredths of a second. 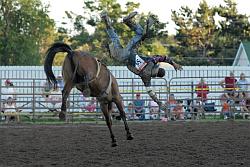 Watch for a sweeping, front-and -back spurring motion, buckrein held high. Ideally, the cowboy falls into a stylish rhythm with the horse, feet thrust full forward, toes turned out in the stirrups, as the bronc’s front feet touch the ground. Then as the horse jumps high, the rider crooks his knees, drawing his feet back, toes still turned out, along the sides until his spurs strike the back of the saddle. The feet go forward again as the bronc descends. Cowboy beware, however, for stylish though it may be, the horse is strong and moving fast and at whim could violently disrupt the rhythm.

The U.P. Pro Rodeo is within the Great Lakes Prorodeo Circuit and consists of Michigan, Wisconsin, Minnesota, Iowa, Missouri, Illinois, Kentucky, Indiana, and Ohio. The Circuit System divides the United States into 12 geographic regions, or circuits. Some, such as the Texas Circuit, consist of just one state. Most however, are composed of several states. The First Frontier Circuit, for instance, consists of 13 states.

The PRCA season ends in October and, soon after, each circuit conducts a year-end finals rodeo. Winners of the finals, as well as standings leaders from each circuit, are invited to compete in March at the Dodge National Circuit Finals Rodeo in Pocatello, Idaho. 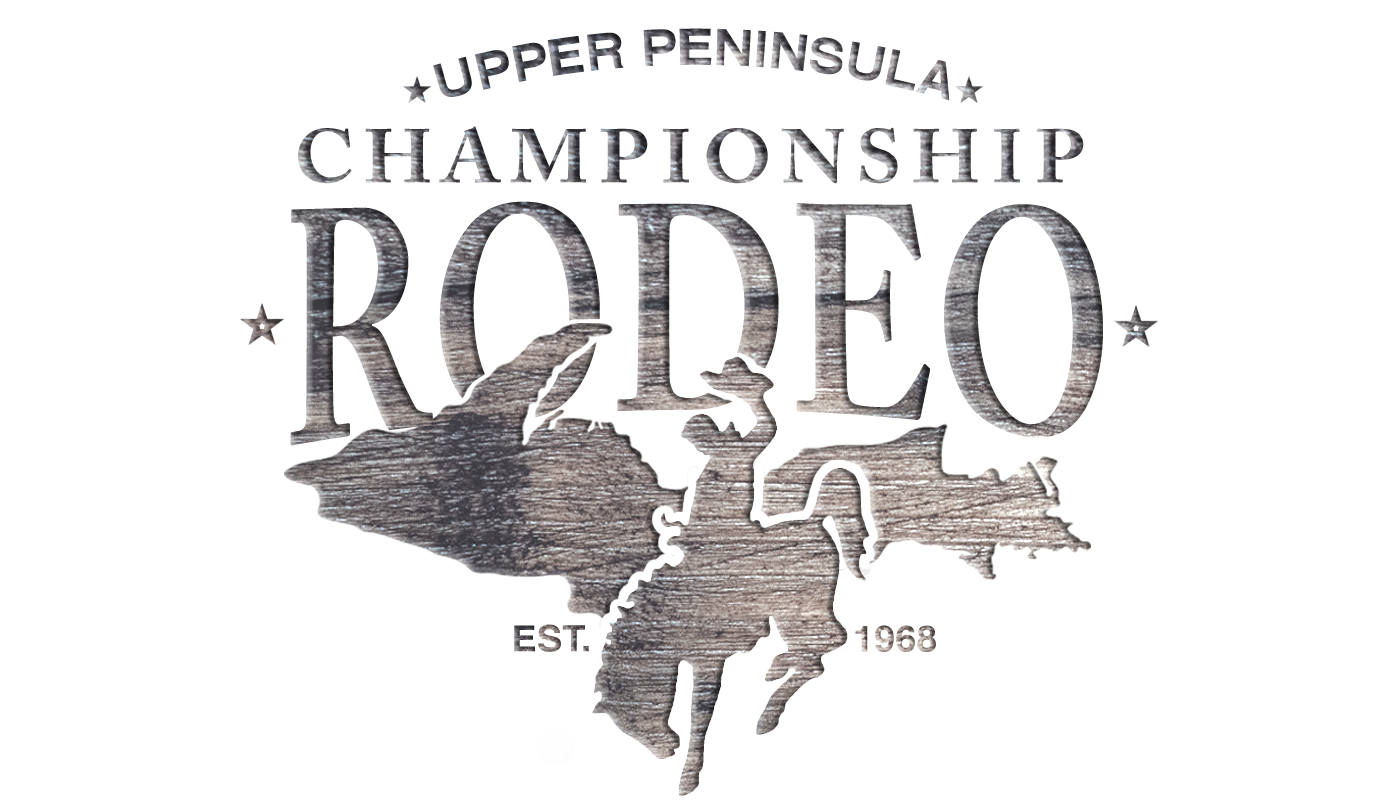